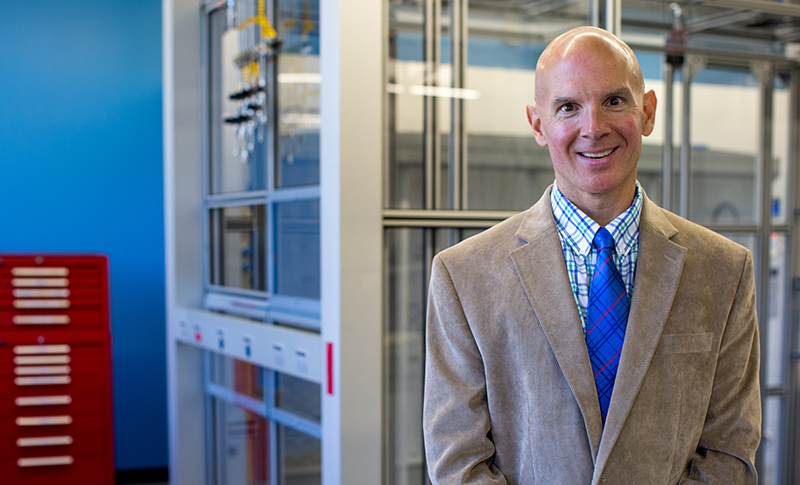 Foundation Distinguished Professor of Chemical & Petroleum Engineering Mark B. Shiflett, who helped to develop a refrigerant that is safe for the Earth’s ozone layer, is among the ranks of the latest class of Fellows of the National Academy of Inventors (NAI), one of the highest honors given to academic inventors. He is one of 148 academic inventors to receive the honor this year and conducts research at KU’s Center for Environmentally Beneficial Catalysis. Dr. Shiflett is the fifth KU faculty member to earn recognition as an NAI Fellow.

Election as an NAI Fellow is a professional distinction accorded solely to academic inventors who have demonstrated a prolific spirit of innovation in creating or facilitating outstanding inventions that have made a tangible impact on quality of life, economic development and the welfare of society.

“Professor Shiflett is an outstanding innovator whose inventions have helped to improve the health of our planet and benefit our society, and he is truly deserving of this latest recognition for his groundbreaking work,” said John Colombo, KU’s interim vice chancellor for research.

Before beginning his career at KU in 2016, Shiflett was a technical fellow at the DuPont Company, where he spent 28 years inventing new products and processes. His most notable inventions include three energy-efficient refrigerant mixtures for replacing chlorofluorocarbons (CFCs) in refrigeration applications such as supermarket frozen food display cases, commercial ice machines and refrigerated transportation.

He holds 44 U.S. patents, three of which protect commercial DuPont products. He is the founder of SMF Science, a startup lubricants company. He has published 80 articles in peer-reviewed journals, written two book chapters and edited one book, and he serves on the editorial advisory board for Industrial & Engineering Chemistry Research.

With the election of the 2018 class, there are now more than 1,000 NAI Fellows, representing more than 250 research universities, government and nonprofit research institutes. The 2018 fellows are named inventors on nearly 4,000 issued U.S. patents, bringing the collective patents held by all NAI Fellows to more than 35,000.

Other KU professors who have received this honor include:

The 2018 NAI Fellows will be highlighted with a full-page announcement in a January edition of the Chronicle of Higher Education.

To learn more about Dr. Shiflett and his research, visit his website: https://shiflettresearch.com/

Please join us in congratulating Dr. Shiflett in receiving this outstanding and well deserved recognition.

Original article taken from KU Today. The University of Kansas is a major comprehensive research and teaching university. The university's mission is to lift students and society by educating leaders, building healthy communities and making discoveries that change the world. The KU News Service is the central public relations office for the Lawrence campus.